Who dies from air pollution?

06 Sep Who dies from air pollution?

Posted at 11:10h in Blog by Androulla Kyrillou 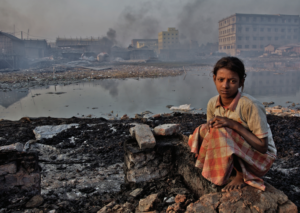 Sixty per cent of the estimated 6.7 million air pollution-related deaths that occurred in 2019 were among children under 15 years and adults over 70 years, according to the Global Burden of Disease (GBD). The vast majority of these deaths – 3.4 million – were among the elderly, while 700,000 deaths occurred among children under 15 years. Importantly, 476,000 of air pollution-related child deaths occurred in the first month of life. Air pollution is a major threat to newborn survival.

Of all causes of air pollution, it is particulate matter that causes the largest burden of disease – 6.5 million of the 6.7 million related deaths. Particulate matter measuring less than 2.5 micrometers in diameter – less than a 30th of the diameter of a human hair – is a major risk for human health. This “PM2·5” is emitted both outdoors and indoors from vehicles, coal-burning power plants, industrial activities, waste burning, farming practices, and household cooking and heating using coal, charcoal, wood, agricultural residue, animal dung, and kerosene.

Air pollution-related deaths are concentrated in 15 countries – China, India, Pakistan, Nigeria, Indonesia, Bangladesh, Egypt, Russia, Ethiopia, Philippines, Myanmar, Viet Nam, Democratic Republic of Congo, Brazil, and USA. More than half (9) are in Asia, four in Africa, and two in the Americas. All but the USA and Russia are low- or middle-income. China, India, Pakistan, Nigeria, and Indonesia are home to 60% of all air pollution-related deaths.

Air pollution is a leading risk factor for death from seven leading causes including heart disease, stroke, chronic obstructive pulmonary disorder (COPD), pneumonia, cancers, neonatal disorders, and diabetes. While air pollution-related deaths from heart disease, stroke, COPD, cancers, and diabetes cluster among older adults, neonatal disorders are concentrated among newborns. Only pneumonia is a major cause of death in both populations, which is why Every Breath Counts publishes a Pneumonia and Air Pollution Scorecard.

The burden of disease from air pollution differs across the 15 countries where these deaths are concentrated. For example, in China, India, Bangladesh, Myanmar, Viet Nam, and Brazil air pollution causes heavy burdens of death from heart disease, stroke, and COPD, and cancers in Russia and the USA. In contrast, pneumonia is a major cause in Nigeria, Egypt, Ethiopia, Philippines, and Democratic Republic of Congo and neonatal disorders in Pakistan, Nigeria, and Ethiopia.

The latest Air Quality Life Index reports that particulate pollution is reducing global average life expectancy by two years relative to a world that met the new, more stringent WHO guideline (5µg/㎥). They conclude that air pollution is the single greatest threat to human health globally.

In countries where outdoor air pollution is the greatest contributor to related deaths, countries will need to set ambitious climate action targets (e.g., 2°C and 1·5°C) together with the strongest clean-air policies, as recommended by the Lancet Commission on Air Pollution and Health. They will need to monitor air quality in real-time and make that information available to the public. Currently, only seven of 54 African countries have reliable real-time air quality monitoring.

Although efforts to improve both outdoor and household air quality have so far failed to produce solutions at scale, there are promising signs with the rapid development of new technologies for monitoring air quality, pollution-reducing and capturing materials and transportation, and clean air farming techniques.

Preliminary results from the multi-country Household Air Pollution Intervention Network (HAPIN) trial suggest that an LPG stove and fuel intervention can overcome barriers to exclusive clean fuel use and reduce exposure levels to household air pollution to within WHO air quality targets. More trials are underway.

The stakes are high. Solutions that can reduce air pollution to the levels required for better health will help countries accelerate progress to multiple Sustainable Development Goals, including:

To accelerate declines in air pollution-related deaths, Every Breath Counts is calling for special action in the 15 countries where these deaths are concentrated. Specifically, governments and their development partners must:

3. Monitor and publish regular estimates of air quality and report progress to the target using the latest Global Burden of Disease data.

This will require more investment in air pollution reduction by national governments, regional political bodies, and international development actors. Only a small number of bilateral and multilateral agencies and organisations are promoting the health and pollution agenda which receives less than 1% of official development assistance, according to the State of Global Air Quality Funding 2021.

In the remaining years to 2030, it is vital that the health sector works together with the climate change and clean air movements to put air pollution reduction center-stage of national, regional, and global health agendas.