Posted at 05:49h in Blog by Androulla Kyrillou 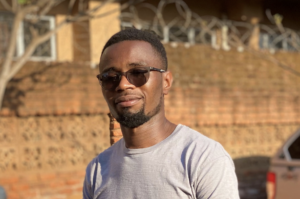 My name is Mtheto Sinjani. I’m a product development manager at the Global Health Informatics Institute (GHII) at Lilongwe Malawi. GHII is the home of the OpenO2 initiative, which I believe most of you know about.

I was one of four team members who kicked off the OpenO2 initiative in late 2020 and I went on to train our OpenO2 Corps interns. I have visited more than 20 hospitals and I have helped to repair hundreds of [oxygen] concentrators as part of this work.

Despite having improved outcomes for many patients through this work, a personal situation arose for me where I was unable to save a close family member. I would like to share my story with you as an example of the challenges our health system continues to face.

It was Saturday morning, on July 31st, when I received a call from my aunt that my uncle has been taken to Kamuzu Central Hospital. I rushed there and followed up on what was wrong, and the nurses said there was water around his heart. The hospital admitted him to the medical ward but did not tell us about the treatment plan they had for him.

In the evening my uncle was given oxygen using an oxygen concentrator. Before I left to go home that night, I checked on the concentrator with the knowledge I gained from the OpenO2 project to make sure everything was right.

Early the following morning I went back to the hospital to check how he was doing. I checked on the concentrator and noticed the flowmeter was set higher than what it was rated and I could see the low oxygen warning light was on. We have observed this practice from our nurses as they believe that higher flow rate achieves better outcomes.

I followed up with the nurse and I was told that the patient’s oxygen saturation was going down and he needed oxygen at a higher flow rate of 15 LPM when the concentrator was only rated 10LPM. I suggested to the nurse to join two concentrators a 5LPM and 10 model using tee connectors.

We had agreed but the hospital didn’t have tee connectors. I knew at work there were some tee connectors so I texted Dr Gerry Douglas to help me with the situation. I rushed to the office to collect them. That was around 7:15am. Gerry guided me that with high-flow rate I needed a non-rebreather mask which the hospital didn’t have. He provided me with one and also gave me a pulse oximeter/sats monitor.

Thirty minutes later, I was back at the bedside and started to connect everything but I mistakenly cut both ends of the tubing and could not connect the non-rebreather mask. I called Gerry to explain the situation and drove back to collect another mask. Gerry drove to meet me halfway and he also carried an electric extension for me to easily connect the concentrators in addition to a suction machine that my uncle was also connected to.

I took everything back to the hospital. Once I had everything, I could see the oxygen saturation going up from 58 into the 90s. Remember this was Sunday morning when the hospital has very few doctors available. With my limited medical knowledge, I could only follow what the nurse said.

I left the ward to meet one of my relatives outside. When I got back, a nurse had taken one of the concentrators and my uncle had desaturated to 50%. Luckily 30 minutes later the nurse introduced an oxygen cylinder in addition to the concentrator and he called me aside to tell me there is nothing we can do here as the doctor is not around and your uncle is very sick.

The cylinder was almost empty but the nurse had others lined up for replacement. However, this required a 28mm spanner to change the flowmeter and the regulator on the cylinder by a technician who stays at the cylinder manifold two minutes away from the ward.

I rushed to call the person. He came and managed to change the flowmeter and regulator. Just close to lunch the cylinder was running low and the spanner person was supposed to be called again. I went there and he was not there.

I called Gerry again and he prepared a shifting spanner from the mobile workshop ready for me to pick up. He was waiting for me at the gate. I left the hospital and picked up the spanner, came back and took the elevator.

When the doors of the elevator opened, I heard cries and I could hear my aunt’s voice. I walked through the corridor and saw my other uncle sitting outside crying. He told me, “You have tried your best Mtheto”.

I kneeled with the shifting spanner in my hand and knew that was the end of it. That’s how I lost my beloved uncle and may his soul continue resting in peace.

So, it’s not just the availability of oxygen that affects us. There are so many other challenges we face in our healthcare system here in Malawi.
ENDS…/

As told to the Every Breath Counts Coalition, 1 November 2021

Mtheto Sinjani is Product Development Manager at Global Health Informatics Institute, a system programmer, 3D designer, and drone pilot. He studied Information and Communication Technology at Handong Global University in South Korea and Daeyang University in Malawi. He has built a machine that produces complex shapes from a computer to real life and more recently an automatic hand sanitizer dispenser. He is a founding member of the heroic OpenO2 team that has brought more than 600 oxygen concentrators back to life to meet the needs of COVID-19 and the patient needing oxygen in Malawi hospitals.