In 1985, Comic Relief launched in the United Kingdom with the goal of using comedy to raise money and help those leading really tough lives. The goal? Creating a just world free from poverty.

The very first Red Nose Day was held in 1988. With millions of people participating in its first year, it was clear that a truly amazing movement was underway.

Since 2015, Red Nose Day in America has raised over $60 million to help kids and young people most in need. Join the journey on May 25 to join efforts to end child poverty.

Join the movement on Red Nose Day by starting a fundraiser for the cause with your colleagues, classmates and members of your community. Here is a list of ideas to inspire you!

From now until June 15, the Bill & Melinda Gates Foundation will match every dollar raised through Facebook up to $1 million. Find out how you can get involved.

Check out the Red Nose Day in America website for ideas of how you can make an impact on May 25, start a fundraiser, and join the celebration!

Take part in the conversation on May 25 and show your support by using #RedNoseDay. The social media kit includes additional content for you to share and spread the red! 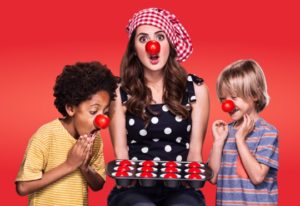