Posted at 13:20h in Uncategorized by Mica Williams

Article originally posted on the PATH blog on November 10th, 2017. 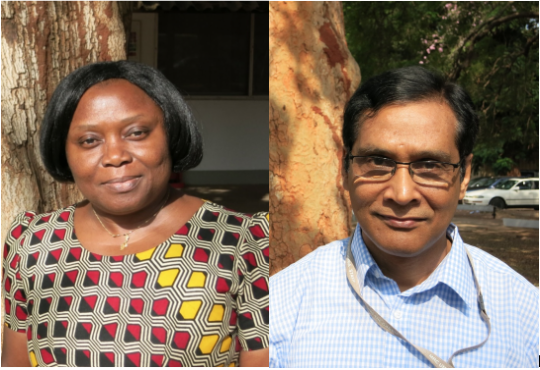 The Gambia’s beauty, rich culture, and laid-back atmosphere are enough to entice just about anyone. But, for two clinicians, the country offers an even greater draw—the opportunity to study vaccines capable of changing the face of global health.

Drs. Claire Oluwalana and Akram Zaman (pictured left and right, respectively) both came to The Gambia when they were hired by the MRC Unit The Gambia (MRCG) as investigators on a large vaccine clinical trial that took place from 2000 to 2004.

The study was evaluating an early version of a vaccine used today to combat the pneumococcus—a common cause of severe childhood pneumonia and invasive pneumococcal diseases (IPD) like meningitis and sepsis (blood infection).

The question was, will such a vaccine be an effective solution for pneumococcal disease in Africa? The stakes were high. Many children’s lives in the poorest, highest-burden regions of the world depended on the answer.

An important vaccine trial for the world’s most vulnerable children

“Back then, pneumococcal disease and pneumonia were very serious illnesses. Child mortality was quite high,” explains Dr. Oluwalana.

Around two million of the world’s children died from pneumonia before age five annually at the time —roughly 90% in Africa and Asia. IPD rates were around 10 times greater in The Gambia and other African countries than in the industrialized world.

“Pneumococcal diseases also cause a lot of morbidity,” Dr. Oluwalana adds. “Such as deafness, mental retardation, cerebral palsy, and developmental delays in children. So, children are not able to attain their potential in life.”

Africa desperately needed a vaccine. One did exist, but it was brand new and only licensed in high-resource countries. It was called a pneumococcal conjugate vaccine (PCV).

The task was to conduct a study that could confirm if a PCV would be highly effective in a target population of infants in a rural, impoverished African setting. The Gambia was a logical location for a trial.

“A large number of studies had been done previously in the country over the span of a decade to get background information around the incidence of pneumococcal pneumonia,” Dr. Zaman explains. “So, this was one of the reasons why The Gambia was attractive.”

With this strong foundation, the study would evaluate a variation of the first PCV, Prevnar®. Prevnar protected against seven varieties (serotypes) of pneumococcus. The study vaccine was the same except that it included two additional serotypes important to Africa, totaling nine.

A day in the life of a clinical investigator 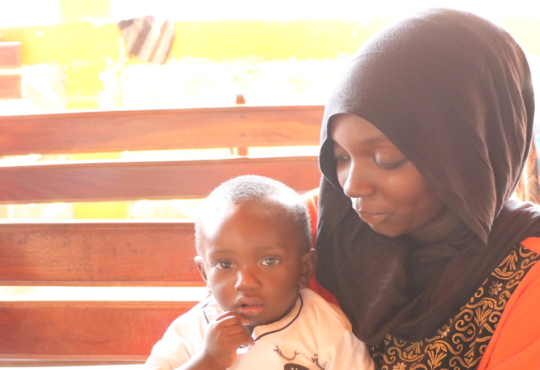 Photo: MRC Unit The Gambia/Aisha Sarr Ya Bajen
Pneumococcal vaccine research in The Gambia served as a launching pad for making these lifesaving vaccines available in Africa and beyond.

During the trial, each day was different for Drs. Oluwalana and Zaman.

“I was the trial epidemiologist,” Dr. Zaman recalls. “Some days I went to the field to spot check the work. Other days I analyzed data or trained workers on data collection.”

Dr. Oluwalana was one of the physicians recruiting participants, assessing eligibility, identifying cases of pneumonia and IPD, and providing medical care for participating children.

“We were able to treat a lot of children who had pneumonia and IPD,” she recalls. “It was a blinded study, so we weren’t sure if they were in the vaccine group or the placebo group at the time. But, we were intervening early, which helped reduce morbidity and mortality in its own right.”

“I remember vividly. One infant came in with drowsiness, fever, fast breathing, and chest indrawing. She had pneumococcal pneumonia, meningitis, and sepsis. We thought we might to lose her, but we wasted no time intervening and she survived.”

This child was lucky. Other children with the same infections sometimes couldn’t be saved.

The results—a reason to breathe easier 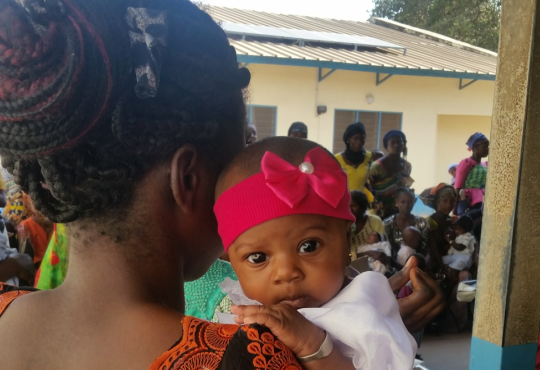 Photo: PATH/Heidi James
Today, more than 95% of The Gambia’s children are vaccinated against pneumococcal disease.

When the study ended, more than 17,000 children had participated, half of which received the PCV and the other half were controls. The results were clear—PCVs were effective and should be made available to African infants.

“The best time was when we were finally unblinded and got the results,” recalls Dr. Zaman. “We were pleased to see that the vaccine was safe and had a real impact in preventing pneumonia and IPD. This was comparable to other PCV trials, so we knew our study was well conducted and designed.”

The findings would go on to inform decisions that made PCVs available to traditionally underserved parts of the world. Just five years later, in fact, The Gambia would be the second country receiving Gavi, The Vaccine Alliance support to introduce PCVs—kickstarting rollouts across low-resource countries that continue to this day.

“The trial was a launching pad for other pneumococcal vaccine studies as well,” explains Dr. Oluwalana.

Eventually, Prevnar was phased out in favor of new PCVs covering more pneumococcal varieties (namely Prevnar 13® and Synflorix™—13 and 10, respectively). The information generated by the Gambian trial helped inform this evolution.

Today, next-generation PCVs are in development, including one being evaluated by MRCG and PATH that’s designed to be more affordable and to focus on the kinds of pneumococcus most prevalent in Africa and Asia.

“A PCV that offers similar protection at lower cost could free up extra funds for other important health priorities,” says Dr. Oluwalana.

The bigger picture of pneumonia prevention 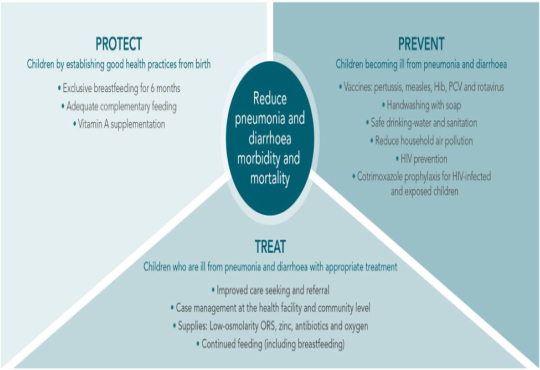 Figure: Protect, Prevent, and Treat Framework. Global Action Plan for the Prevention and Control of Pneumonia and Diarrhoea.
Integrating the pneumonia fight with efforts to defeat other child killers like diarrhea can save even more lives.

Pneumonia may still be the leading cause of under-five deaths worldwide, but progress has been undeniable. Such deaths are half of what they were in the days of the study—thanks in no small part to the global rollout of PCVs. Child pneumococcal deaths have likewise dropped by many thousands.

The biggest impact is possible, however, when PCVs are used as part of a suite of prevention and treatment tools, including vaccines against other pneumonia causes (like Haemophilus influenzae type b), antibiotics, oxygen therapy, diagnostics, and other interventions.

Applying these strategies in concert is essential if pneumonia is to be dethroned as the #1 child killer. So is tackling pneumonia with another leading infectious childhood killer, diarrhea, which could save more than a million young lives every year.

After all this time, both Drs. Oluwalana and Zaman remain at MRCG—The Gambia’s allure still strong.

“This is one of the best places in the world where you can see continuous progress over time,” says Dr. Zaman. “There’s a continuum of research here. Very few places have this history, expertise, experience, and facilities.”

On this continuum, one thing remains steadfast in the country—the understanding that there’s no time like the present to invest in child health. Let this be an inspiration for us all to play our part in the fight against pneumonia. Need ideas? Check out stoppneumonia.org.

For more about the study highlighted in this blog, watch A Mother’s Story: Pneumonia Vaccine in The Gambia, featuring commentary from Dr. Oluwalana.