Posted at 13:01h in Blog by Androulla Kyrillou 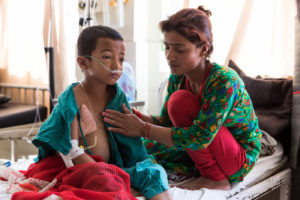 In early 2015, Nepal became one of the first countries in Southeast Asia to introduce pneumococcal conjugate vaccine (PCV) nationwide. But the path to this pioneering decision was long and often uncertain.

We now know that Nepal, like much of Southeast Asia, bears a significant burden of childhood pneumonia –  a leading cause of death in children and one of the diseases PCV is designed to protect against. But before the early 2000s, we had very little local data on pneumonia making evidence-based decisions about treating and preventing it a challenge.

In my own work as a physician at Patan Hospital near Kathmandu, I knew that a lot of my time was spent treating children with pneumonia and that there was a promising new vaccine that could help prevent many of these cases. As a new mother at the time, I also knew how important the vaccine would be in preventing the heartache many Nepali mothers experienced when their children were sick or died from this disease. But when I learned how expensive the vaccine was in the private market (the only way to get it then, since it wasn’t included in Nepal’s government-funded immunization program) I knew it was beyond the reach of the majority of Nepali families. The problem was nobody knew exactly how many cases of pneumonia and other diseases could actually be prevented by the new vaccine in Nepal. Back then, no Asian country was using PCV therefore all our data on its effectiveness came from places like the United States; without local data, it was difficult to get a clear picture of whether introducing this expensive vaccine nationwide made sense.

In 2005, with support from PneumoADIP, our team at Patan Hospital began collecting comprehensive data on invasive bacterial diseases (including pneumonia) in children. Soon we learned that more than 75 percent of invasive pneumococcal disease in children were types that could have been prevented by PCV. This was just the kind of evidence that showed the value of introducing the vaccine nationwide – and eventually, that’s what our government did.

Our early work on invasive bacterial disease eventually led to the initiation of the current PneumoNepal study with key partners including Patan Academy of Health Sciences, the University of Oxford, the International Vaccine Access Center at Johns Hopkins and the University of Otago.
Fifteen years after our initial disease surveillance work began, and nearly four years after that data helped support the introduction of PCV, the PneumoNepal study is now evaluating the health, programmatic and economic impact of the vaccine. Early results are promising: in less than four years of PCV use, the proportion of children hospitalized with pneumonia who carry vaccine-type bacteria in their noses (an indication that the disease was caused by these bacteria) has been cut in half. 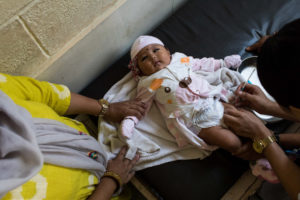 In addition to determining how well the vaccine is working, establishing a robust research infrastructure has allowed us to further expand our understanding of pneumonia in Nepal by providing a foundation for additional research. For example, one of the PneumoNepal study components is an economic evaluation that shows the average cost of a case of pneumonia is $177, of which $116 is paid directly by families. This cost can be a true burden for household finances, especially for poorer families – it represents nearly half of Nepal’s average household monthly income of approximately $250.

Data like this can be extremely enlightening and highlight that PCV programs are not just an expense –  investing in vaccine programs is a viable poverty reduction and financial risk protection strategy with the potential for meaningful economic returns.

All photos courtesy of Amanda Mustard for John Hopkins University