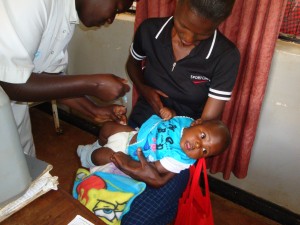 Pneumonia is the deadliest disease among children under the age of five, killing an estimated 1.4 million children annually. Today on World Pneumonia Day, we not only recognize the burden of this disease, but we at the USAID-funded Maternal and Child Health Integrated Program (MCHIP) also celebrate the fact that pneumonia is preventable and that safe, effective and affordable tools are helping to avert and treat the disease. The Pneumococcal Conjugate Vaccine (PCV) can protect susceptible children against severe forms of pneumococcal diseases—mainly pneumonia, meningitis, bacteraemia and sepsis—and MCHIP is assisting countries in introducing this lifesaving vaccine in high mortality countries.

In Tanzania, pneumonia accounts for an estimated 18% of deaths in children under the age of five. In recognizing the gravity of this disease, the Government of the United Republic of Tanzania will introduce the PCV-13 form of this lifesaving vaccine nationwide in January 2013 (with an official launch planned for December 5, 2012). Tanzania will also introduce the rotavirus vaccine to help protect against another major killer of children—diarrhea.

This simultaneous introduction is a major undertaking for the Tanzanian Ministry of Health and its partners. However, given the high immunization coverage of other routine vaccines throughout Tanzania for the last several years (e.g., DTP3 coverage sustained over 85%), the integration of the PCV-13 and rotavirus vaccines into this system is likely to make a significant impact in the reduction of morbidity and mortality due to vaccine preventable diseases in children under five.

MCHIP is part of a multi-partner collaboration—which includes the GAVI alliance, WHO, UNICEF and other organizations—that is supporting the Government of Tanzania to plan, implement and evaluate the introduction of these vaccines. To help countries prepare, MCHIP has been providing technical assistance with applications for these new vaccines, immunization program readiness, and capacity building for health professionals to the Expanded Program on Immunization/Ministries of Health in several countries. In Tanzania, MCHIP will also continue to provide support after the launch to help further strengthen the country’s routine immunization program.

Globally, MCHIP has supported the introduction of PCV vaccines in the Democratic Republic of the Congo, Kenya, Malawi, Rwanda and Zimbabwe, and will be assisting with PCV introduction in Senegal, Uganda and Tajikistan in the coming years. This work is part of a larger MCHIP technical support effort to ensure that new vaccines will be incorporated into a routine immunization system that can provide safe, timely and affordable protection against some of the major contributors to child death, such as pneumonia.

On World Pneumonia Day, here’s to acknowledging those affected by this disease, striving toward the work ahead, and celebrating our successes in preventing this disease!