Posted at 07:42h in Blog by Androulla Kyrillou

Vaccination saves lives; especially in countries where access to healthcare is still a challenge. More than five million children in vulnerable areas of Africa and Latin America have been vaccinated since the launch of the Child Vaccination Programme more than 10 years ago. The programme is promoted by ”la Caixa” –  the largest private foundation in Spain and one of the most important worldwide –  in partnership with Gavi, The Vaccine Alliance, with support from the Bill & Melinda Gates Foundation and in cooperation with ISGlobal.

Thanks to the contribution made by ”la Caixa” Foundation and to the engagement of both employees and customers of CaixaBank (a result of corporate social responsibility in the banking sector) more than 31 million euros have been raised since 2008 in donations from companies, clients and employees, as well as micro-donations by individual citizens.

These contributions come from 276,905 donors from all over Spain, including the 1,461 companies and 7,187 CaixaBank customers that endorse the Alliance for Child Vaccination. A further 760 ”la Caixa” employees and more than 267,497 charitable citizens also made donations in response to the campaign for micro-donations. And its partnership with Gavi has enabled ”la Caixa” to reach a total of 10 countries in Africa and Latin America, including Bolivia, Cameroon, the Central African Republic, Ethiopia, Honduras, Mauritania, Nicaragua, Sudan, Tanzania and Mozambique.

Jaume Giró, CEO of ”la Caixa” Foundation, and Dr Seth Berkley, CEO of Gavi, The Vaccine Alliance, have recently renewed the partnership for the 12th consecutive year focusing its efforts on immunisation against pneumonia in Mozambique. In recent years, ”la Caixa” Foundation has focused on providing the pneumococcal vaccine to combat pneumonia – the leading cause of child mortality in that country. 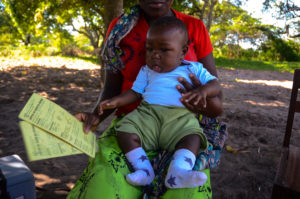 One of the most encouraging signs for Mozambique is it’s full integration into the national health system of the ManhiÃ§a Foundation research facility. The centre is currently involved in phase III trials of the RTSS malaria vaccine candidate.

According to Jaume Giró, CEO of ”la Caixa” Banking Foundation: “Vaccination at an early age is vital to ensure that children grow up healthy and strong, able to develop fully and enjoy equal opportunities. What drives us in our alliance with Gavi is the firm belief that no child should die anywhere in the world from preventable illness. These children are the generation that will lead the new world we will live in”.

The partnership between ”la Caixa” and Gavi contributes to achieving the Sustainable Development Goals (SDGs) – in particular: SDG 3, Good Health and Well-being for People; and SDG 17, Partnerships for the Goals.

Gavi, the Vaccine Alliance, is a public-private partnership that brings together developing countries and donors, including governments, the World Health Organisation, UNICEF, the World Bank, the vaccine industry, technical agencies, civil society, the Bill & Melinda Gates Foundation and private sector partners, including ”la Caixa” Banking Foundation, which leads the initiative in Spain. Since the alliance was launched in 2000, Gavi has vaccinated more than 700 million children, preventing an estimated 10 million premature deaths.