In a 2016 address titled, “The Future of Aid for Health”, Larry Summers argued that there should be a “substantial reallocation” of foreign health aid towards global public goods, such as developing medicines and vaccines for diseases of poverty; managing cross-border externalities (e.g. pandemics, antimicrobial resistance); and fostering global health leadership and stewardship, including improving priority-setting processes. This is a good list, but the most important item is buried at the bottom – priority-setting. Without setting the right priorities for which medicines and vaccines to develop, which externalities to manage, and which leaders to steward, health impact will fall short.

Medical technologies have already contributed significantly to reducing preventable deaths in many countries, but currently no country has achieved all nine of the Sustainable Development Goals (SDGs) for health. While some countries are on track to do so, many will struggle. These are the countries where communicable and/or non-communicable diseases, pregnancy and childbirth, and injuries are still causing tens of thousands, and in some cases millions, of deaths among people under 50 each year. For these countries, the strategic adoption of technologies that target the leading causes of early death, and the associated risk factors for death, hold the greatest promise for progress. They are also the areas where foreign health aid and investment can deliver maximum impact.

But where are these vulnerable populations, what are the leading causes of early death, and which technologies could save and improve the most lives and dramatically accelerate achievement of the health SDGs? An analysis of the new Global Burden of Disease (GBD) data reveals 20 countries where more than 80,000 people under 50 died in 2017. India is the clear outlier, with 2.8 million early deaths, but Nigeria and China are also each losing more than 1 million children and working-age adults every year.

Further, Pakistan, Democratic Republic of Congo, Indonesia, and Ethiopia are losing more than 300,000 children and working-age adults each year. These 20 countries cluster in five regions, including South Asia, East Asia, Sub-Saharan Africa, the Americas/Europe, and the Middle East. Low, middle, and high income countries are all represented on the list, but the majority of countries are in Africa (7) and Asia (7). 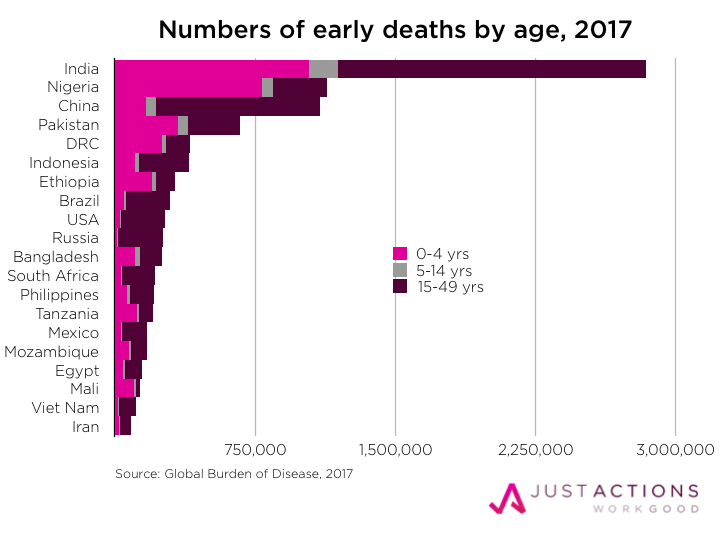 In some of these countries, early deaths cluster among children (Nigeria, Democratic Republic of Congo, Ethiopia, Tanzania, and Mali), while in others deaths cluster among working-age adults (China, Brazil, USA, Russia, South Africa, Mexico, Egypt, Viet Nam, and Iran). But some countries are dealing with heavy burdens of early death among both groups, including India, Pakistan, Indonesia, Bangladesh, Philippines, and Mozambique.Early deaths in the 20 countries range from a low 9% of all deaths in the USA to a high of 72% in Mali. However, all of the countries where more than 50% of deaths occur among people under 50 years are in Sub-Saharan Africa. In contrast, the countries where less than 20% of deaths are early are all in Asia, Europe, and North America.

The rate of progress in reducing early deaths differs markedly across the 20 countries. Between 1990 and 2017, eight countries reduced early deaths by more than 50% (Bangladesh, China, Iran, Ethiopia, Indonesia, India, Egypt, and Brazil), while another eight countries achieved reductions below 50% (Pakistan, USA, Russia, Philippines, Tanzania, Mexico, Mozambique, and Viet Nam). Of concern, early deaths actually increased in four of the countries over the period, including in Nigeria, Democratic Republic of Congo, Mali, and South Africa. The countries that recorded the largest decreases in early deaths all achieved major reductions in child deaths over the period.

Technologies that reduce the underlying risk factors associated with early child death would include tools that can reduce the rates of low birth weight/short gestation and child growth failure, and improve access to clean water and air, while among adults the investments that could save the most lives will be able to cost-effectively reduce high blood pressure, alcohol use, and smoking among young men, and high blood pressure, obesity, and unsafe sex among young women. For the countries where early deaths are concentrated among children, investments that can target three leading and relatively neglected causes of death is urgently needed – neonatal causes, pneumonia, and nutrition. New tools are needed to prevent preterm birth and congenital birth defects, to diagnose women at risk early in pregnancy, and to treat babies born with complications. In fact, an entire suite of products is needed to retool Neonatal Intensive Care Units (NICUs) in low resource settings. Technologies that improve the prevention, diagnosis, and treatment of child pneumonia will also save many lives and are the most important infectious disease priority among children. The holy grail is a rapid diagnostic test that can distinguish viral pneumonia, from bacterial pneumonia, and malaria at the point of care. As malnutrition is driving more than a half of all child deaths, investments that reduce child wasting and stunting by improving access to breastmilk (e.g. via human milk banks), and/or other supplements will substantially reduce the risk of child death. To reduce deaths among working-age men, medical technologies that can prevent, diagnose, and/or treat heart disease, cirrhosis, and stroke will have a major and growing impact, as deaths from non-communicable diseases continue to rise in the 20 countries. Investments that reduces the risks of high blood pressure, high cholesterol, and obesity will further drive reductions in non-communicable disease deaths among young men. However, in many of the 20 countries investments that target the leading communicable killers, especially tuberculosis and HIV/AIDS will remain critical until the spread of these infections has been controlled. In this context, new tools that reduce the risks of unsafe sex, alcohol use, and smoking among young men will have a major impact. Further, investments that specifically target the victims of road traffic accidents, self-harm, and interpersonal violence will prevent many deaths among young men.

Among working-age women, the clear investment priority is reducing deaths from heart disease, followed closely by tuberculosis, breast cancer, and road traffic accidents. Investments that reduce the risk of death in pregnancy and childbirth will remain critical in a subset of African and Asian countries, as will technologies that can prevent the spread of HIV/AIDS. Diagnostic platforms that include the major infectious diseases and chronic conditions that threaten healthy pregnancies are desperately needed and could save many lives. Major increases in the use of long-lasting, self-administered contraceptive devices by a majority of the women in the 20 countries would be transformative not just for women’s health, but also for children’s health. Investments that reduce the risks of high blood pressure, obesity, and unsafe sex among young women will prevent the onset of disease and the spread of infections, reducing both communicable and non-communicable disease among young women.