Posted at 21:33h in Blog by Brooke Farrenkopf

Authored by Carolyn Miles and William Moss. Carolyn Miles is the President & Chief Executive Officer of Save the Children US. William Moss, MD, MPH is the Interim Executive Director at the International Vaccine Access Center, Johns Hopkins Bloomberg School of Public Health 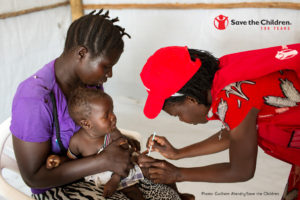 Parents work hard to help their children stay healthy. Try as we might, hand washing, good nutrition, and flu shots are sometimes no match for “what’s going around.” A cough. A fever. A stomach bug. If you feel like these illnesses are everywhere – you’re right.

And families around the world are battling the same illnesses. But in some places it’s far from a fair fight. Illnesses that are easily preventable and treatable in the United States can take the life of a child in Africa. More than 1.3 million children die each year from pneumonia and diarrhea, two of the leading killers of children in poor countries.

In the U.S., routine immunization helps protect against these common sicknesses. Hib (Haemophilus influenzae type b) and pneumococcal conjugate vaccines protect against pneumonia, and the rotavirus vaccine protects against one of the most common and serious stomach bugs. These vaccines have drastically reduced the number of children who suffer from these illnesses. A 2017 study found the rotavirus vaccine cut nearly in half the number of young children hospitalized for diarrhea, saving more than $1 billion in health care costs over five years. Similar benefits have been documented with the vaccines that prevent pneumonia.

Though germs are everywhere, health care sadly is not. Parents around the world share a common goal of protecting their children, yet too many families still lack access to, or even awareness of, vaccines and medicine that could save their children’s lives. As a result, the stomach bug that means a few days off school and a trip to the pediatrician for a child in Maryland can mean severe dehydration and even death for a child in Kenya. The respiratory infection that goes around at a preschool in Atlanta causes life-threatening pneumonia for young children in Ethiopia. What separates parents around the world is not the illnesses their children face, but how the health care systems they have access to are equipped to battle them.

While some may dismiss the challenges parents in poor countries face as inevitable and unfortunate consequences of poverty, this is simply not the case. This is not only a battle worth fighting, it’s also one we can win.  We know how to prevent these deaths, and in many places, we are already succeeding. India, Nicaragua, Tanzania and many other countries have increased immunization rates and have saved lives as a direct result. Since 2000 the number of children’s lives lost to pneumonia and diarrhea has been more than cut in half – from 2.9 to 1.3 million deaths annually.

Every year, fewer children lose their lives to preventable diseases. We should be encouraged—but not satisfied—with the progress we’re making. We can do better. We can increase resources to equip families and health care systems around the world with the tools they need to battle our shared infectious foes. We can find new ways to deliver lifesaving vaccines and antibiotics to make sure no child dies from a cough, the stomach bug, or a mosquito bite. And we can muster our political courage and give voice to the needs, worries, and love of parents who, like germs, are the same everywhere.

This was originally posted on Save the Children: Voices from the Field.