Childhood pneumonia presents myriad challenges in developing nations. With this collection of case studies, we highlight stories across the spectrum of work that goes into fighting the leading killer of children under 5 around the world. Stories and photos courtesy of World Vision International. 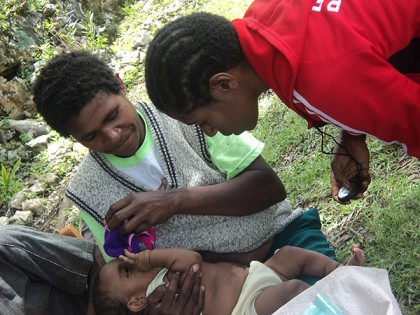 A community health worker checks for fast breathing in a child who may have pneumonia, Papua, Indonesia. Credit: Sigit Sulistyo/World Vision.

When three community health workers took up their training in 2011 in the remote village of Yalelo, West Papua, Indonesia, they faced a difficult child health context. From 107 households in this village, 11 children had died between 2009 and 2011 from pneumonia or diarrhea.

The high prevalence of pneumonia in Yalelo can be related to the traditional houses of the village, with an open fireplace and limited ventilation. The causes of diarrhea are also easy to identify, as villagers and their children sometimes drink unboiled water and do not wash hands with soap before eating. The situation is made worse by the inability, or at times, reluctance, of families to seek treatment for sick children. Most children died at home. With the village location a three hour walk to the road and transport, other children who were taken to seek treatment died on the way.

“This kind of story happened not just once, but three times,” explains one of the community health workers, Arnos Asso. “It is traumatizing for us in Yalelo. Because of this, if our children get sick, we prefer to treat them here at our home.”

WV Indonesia is working together with the District Health Office and UNICEF to implement an Integrated Community Case Management (iCCM) program in the Papua context. The program is empowering community health workers to be able to provide early detection and treatment of pneumonia, diarrhea, and fever and emphasizing the needs of referral for cases which have danger signs or cannot be treated at community level.  The advantage of training people like Arnos Asso is clear; local health workers understand their community context, customs and hesitations on children’s health, and what families are prepared to do to protect their children from further harm. Between October 2011 and June 2012, the three community health workers  successfully managed 97 cases of pneumonia, pneumonia, diarrhea and fever.

“We are so glad and feel so lucky for having this new knowledge,” says Adin Lokobal, another of the three. “People come as soon as possible to bring us their sick children. No more sad stories here at the village of Yalelo.” 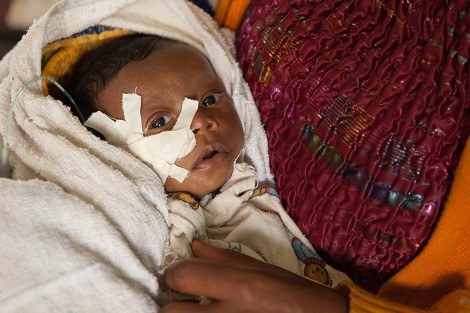 Ruth Ndambendore, 29, a nurse at Kigeme Hospital near Nyamagabe in southern Rwanda, attends the health needs of dozens of families each day from the Kigeme Refugee Camp. The families are from neighbouring DRC, arriving in waves as the camp grows larger and less resourced to meet the needs of its inhabitants. She reports that many children are arriving malnourished, and others are developing malnutrition as a result of limited resources in the camp. So far six children from the camp have died at the hospital. Four adults have died as well.

“Many children are suffering from pneumonia due to the cold weather,” she says. “Most of the cases who come with severe malnutrition died.” Food is a big problem. “For those who are here, the hospital doesn’t provide food but their families provide food for them. They take care of themselves. We try to get milk for the severe cases, but for moderate cases, we don’t do anything,” she says. Ruth is worried that the pneumonia situation will become far worse if nothing is done before the wet season begins. Clothing is a critical need for the small children, and for newborns in particular, who lack clothes and blankets to protect them in the early days of their live. “The mothers are worried but there’s nothing they can do,” says Ruth. 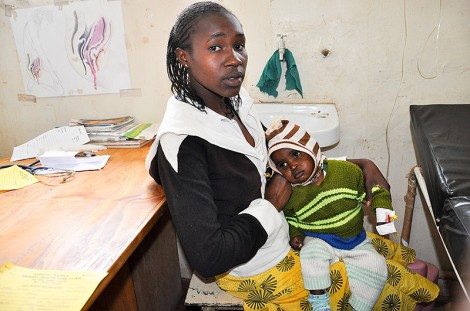 Soweto Kayole PHC is a community owned health facility situated in one of Nairobi’s informal slum settlements. Supported by the government, it operates on a user-pays system, and mothers do not always bring their children for treatment until the illness – and the risk –becomes severe. Cash flow is also a major issue for the facility, with staff facing constant shortages of lifesaving drugs and other supplies.

Diarrhoea tops the list of children’s cases at the facility, common and easily spread in these cramped living conditions. Last month, the hospital recorded 221 diarrhoea cases in children under five, followed by pneumonia at 203 and malaria at 88.

Joseph Mutisya, age 14 months, is one of these children, a frequent visitor following recurrent diarrhoea episodes. “He started vomiting and passing out. I gave him some medication but his condition did not improve, so I had to rush him here,” his mother, Blantina Kamene, says. Today he is weak and severely dehydrated, waiting for an intravenous drip to be found.

The frustration of working to prevent deaths of children against a backdrop of perennial drug shortages is voiced by Anastacia Egala, the Sister in charge at Soweto Kayole PHC. “It greatly demoralises us. It feels terrible when you, as a health care giver, know what you are supposed to do but your hands are tied. We have the personnel but no drugs,” she says.

In July 2012 her hospital ran out of drug stock with a delay in government funds to purchase what they needed. They referred the critically sick children to other centres, some of which were also struggling with supply. “Sometimes when we refer to another centre and it has no drugs, we end up losing the child unnecessarily,” adds Anastacia.

Currently, her clinic is in urgent need of Oral Dehydrating Salts (ORS), Zinc tablets and Intravenous (IV) fluids, all of which are on the health ministry’s essential medicines list. 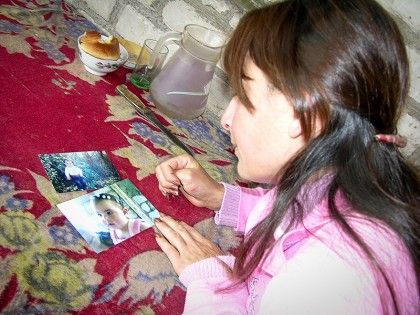 Hamest, mother of Hayarpi who died from pneumonia aged three, looks at a photo of her child. Credit: Anahit Shirinyan/World Vision.

“Everything happened within a week. She had caught a cold. She told us she had a throat ache. We could see she was breathing a bit heavily. We took her to the community doctor nearby. He didn’t encounter anything serious. He said it was flu and prescribed medicine. Two days later her situation deteriorated. We had to take her to the regional hospital in Vanadzor. There they told us they couldn’t help us, and that we had to take her to the capital, Yerevan. We had to pay 80,000 Drams (US$210) for the ambulance to take her to Yerevan. In Yerevan, they took her out of the critical situation and then she was ok. They said there wasn’t anything serious with her. But two days later her condition deteriorated again. After examining her once more, the doctors told us she had a hidden pneumonia they hadn’t encountered before.

“At first we were asked for 10,000 drams, and then we learnt child healthcare is free of charge, and that we shouldn’t have paid anything. Then when our daughter was in the hospital room, we were to pay 3,000 drams per day for a nurse to look after her. I said I would take care of my child myself. I was staying in the corridor. She would wake up and call me during the night.

“She didn’t sleep during the last night at all. She wanted to speak with me. I was trying to convince her to get a little sleep, but she didn’t want to. In the morning the doctor told me that my daughter’s heart was beating too slowly. He told us there was no hope she would survive. He advised us not to enter her room, because any noise could harm her. Then we learnt she had died…” 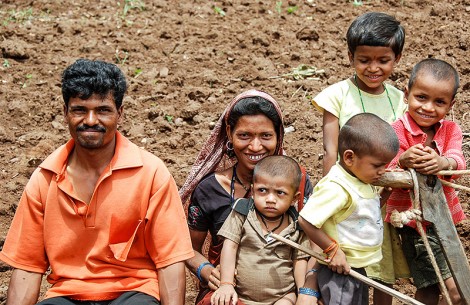 A healthier family – though Neta and her four children have all faced the effects of malnutrition, supplementary feeding and a more varied diet have improved the odds of their survival. Credit: Annila Harris/World Vision.

Neta Sanj Kasdekar, frail and underweight, was married at the age of 18 and soon gave birth to her first child Kiran. Kiran was small at birth and malnourished ever since. “I was unable to produce breast-milk. It could be the reason my children were weak,” Neta says.

With little awareness of birth spacing, Neta gave birth to three more children who faced the same challenge. All were underweight from the time of their birth. The children kept falling sick with colds, coughs and diarrhoea, and the parents faced constant medical bills to treat these illnesses. Younger children Jay and Vijay were both hospitalised with pneumonia, while baby Krishna needed emergency treatment for his diarrhoea.

“This whole situation could be avoided if the parents pay more attention to their children and healthy eating habits,” says Prabha Dharma Dongre, who works at a government sponsored child health centre in Neta’s village.  “Their main focus is on work. Work in the field starts early morning and the children are left to tend to themselves or with the elderly. Parents do not monitor the food intake of their children. Meals are cooked twice a day but lack nutritional value,” Prabha says.

With the start of the supplementary nutrition feeding programme in 2010 by World Vision India, things began to change. The programme provides supplementary food with high nutrient value to children identified as malnourished, and their mothers are also supported to create a stronger emphasis on nutrition at home – for themselves as well as for their children.

At the time of enrolment, in 2010, Krishna, Jay and Vijay were severely acutely malnourished children, while Kiran was a moderately acute malnourished child. They are now out of danger and continue to enjoy their more varied diet, while the bouts of illness in the household have greatly reduced.

“The menu of the feeding programme was finalised after consulting a nutritionist. It includes groundnut and jiggery, soya beans, green gram, boiled eggs and potatoes, milk, gram and green vegetables, chick peas and mung beans. The menu differs from day-to-day. The eggs and groundnuts are a big hit with the children,” says Chamula, a community development coordinator in Krishna’s community. 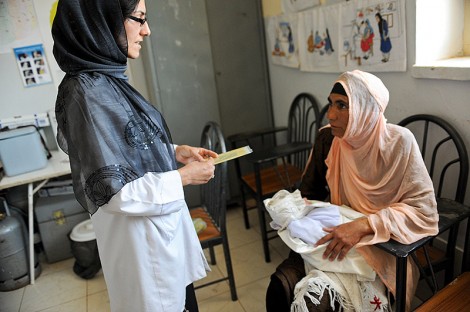 Zahara and her daughter-in-law, Sarah (age 22), bring six-week Omar for regular checkups at the comprehensive health clinic in the town of Eslam Qala, in western Afghanistan, near the Iranian border. “My daughter-in-law does not know anything about infants right now,” says the grandmother. “Omar is her first, but I’ve started to train her about things like safe drinking water, cleaning the food, and protecting the baby from pneumonia, keeping him from the cold.” Without prompting she covers the main health issues facing infants in Afghanistan and best practices for preventing them.  She rattles it off, confidently, with pride and without hesitation. “Today I came for the vaccination because of the benefits it provides a child – against polio and other diseases,” the grandmother says. “Before the people didn’t know or understand about immunization, and there were too many diseases affecting children. There were no vaccines when I was a girl.  Now we understand though and come to the clinic for them.”