Pneumonia and diarrhea continue to kill hundreds of thousands of young children in many countries. 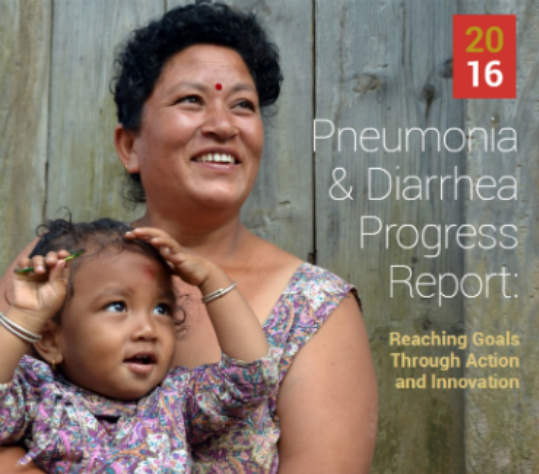 A new report finds some progress in combatting pneumonia and diarrhea among young children in the nations most severely impacted by the two diseases, but they remain responsible for hundreds of thousands of preventable deaths around the world.

In 2015, pneumonia and diarrhea together led to one of every four deaths globally that occurred in children under five years old. These two diseases are largely preventable with vaccines and simple and inexpensive treatments.

Of the 15 countries profiled in the report – those with the highest rates of death globally due to the two diseases – seven have mortality rates of 25 per 1,000 live births or higher due to pneumonia and diarrhea alone. This translates into an estimated 450,000 deaths among children under age five in these countries.

The 2016 Pneumonia and Diarrhea Progress Report: Reaching Goals Through Action and Innovation is being issued by the International Vaccine Access Center (IVAC) at the Johns Hopkins Bloomberg School of Public Health today ahead of World Pneumonia Day, which takes place every year on November 12. IVAC began publishing its annual report in 2010 with the goal of highlighting two diseases that would, if more children received vaccinations and/or treatment, lead to fewer deaths.

“Pneumonia and diarrhea fly under the radar,” says Kate O’Brien, MD, MPH, a professor in the Bloomberg School’s Department of International Health and IVAC’s executive director. “These illnesses are so common that many people and organizations fail to recognize the need to step up efforts and identify creative solutions to fight them. Although most cases are easily prevented and treated, they often prove deadly when families cannot access basic health services such as vaccines and antibiotic treatment.”

In the report, IVAC identifies the 15 countries with the greatest number of deaths from pneumonia and diarrhea among children under the age of five in a given year. IVAC then uses a scoring method based on the Global Action Plan for the Prevention of Pneumonia and Diarrhea (GAPPD) developed by the World Health Organization and UNICEF. A country’s “GAPPD score” measures the use of interventions that protect against, prevent and treat pneumonia and diarrhea. The higher the score, the more interventions are being used.

These interventions include vaccination, exclusive breastfeeding, access to care and use of antibiotics, oral rehydration solution and zinc to treat the illnesses. These measures are known to prevent childhood deaths due to pneumonia and diarrhea and could help achieve the United Nations’ Sustainable Development target goal of reducing under-five mortality to at least 25 per 1,000 live births by 2030.

“The report highlights incredible progress in child health since 1990, but cautions against complacency in fighting the two leading killers of children,” O’Brien says. “We can do better, we can make better use of the tools in hand and we have great opportunities to create innovations that will save lives.”

The report was funded by the Bill & Melinda Gates Foundation.